Notes from the Field

Why I don’t use GPS 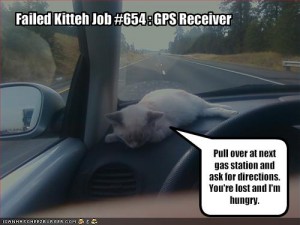 I haven’t polled my fellow sales reps, Cambridge or otherwise, to find out who uses GPS, but I’m guessing at least some of them do. After all, the technology is really popular these days – so popular, in fact, that theft of the systems is rampant in my neck of the woods. Leave one in your car overnight at your peril. But fear of waking up to a smashed window isn’t why I refuse to use an auto navigation system.

When I started selling books, my predecessor left me no directions to my new accounts, just a boxful of maps of various Midwestern states. When I called to make appointments for the first time, I was too embarrassed to ask, “Um…how do I get to your store?” I had been a book buyer myself, and I didn’t recall anyone asking me for directions. It was a little scary to leave for, say, St. Louis with nothing more than an address and the buyer’s phone number (and keep in mind, this was a few years before cell phones became the norm). Of course, I quickly discovered that the internet offered online maps and directions, but to some extent, every visit was a new adventure, and the truth is, most of the time I really liked that about the job.Every once in a while, a less-traveled colleague or friend would say to me, “You’re so brave! I could never do what you do,” and I would beam with pride. I grew up with a family who loved road trips, who took drives in “the country,” with no other purpose than to see a new place, no matter how prosaic. Trying a new route or driving without a map was just part of the fun. If I hadn’t grown up like this, I probably wouldn’t have become a rep. Yes, it is tiring to drive alone for hours at a time. Sometimes traffic or weather or road conditions are bad. But for me at least, there’s still a small element of something romantic, even glamorous, about being on the road.

And GPS takes some of that romance out of the enterprise. I mean, how brave and independent do you have to be if there’s a voice in your car guiding you every step of the way? The other day, a friend who doesn’t drive told me about his own GPS experience. He and some colleagues had an after-work meeting in a suburb in our area. Public transportation was available, but not frequent, so he was grateful when one of his co-workers offered him a ride home after the meeting had ended. The co-worker has GPS, so he plugged in my friend’s address and was confidently on his way. At some point in the journey, however, my friend suggested ignoring the GPS instructions to avoid a congested street. The co-worker complied, but his eyes were apparently wide with fear, and he continually asked for reassurance that they were on the right path to their destination. This is no way to live, especially if you drive frequently or in an urban area, where you always need a back-up plan (or two).

Yes, I know I risk sounding like a Luddite. Auto navigation systems are wildly popular, they save time for many people, and the technology can only improve. I’ve heard that some of the new systems can even help you find a parking space (a powerfully compelling feature for a sales rep). Until GPS becomes standard in all cars, though, I prefer to keep that sense of adventure in my job.