In 1872 Oakand, California, the Japanese Iwakura Embassy toured a winery. The embassy was established as one of Japan’s first formal contacts with the industrial west, and used to learn about new ways to develop industry and commerce.

We visited a winery [Landsberger’s in Oakland] which produces 232,000 bottles annually. Champagne costs $7 to $10 per case; wine, $2.50 to $3 per case. The bottles are imported from Paris at a cost of 1 3/4 cents each. The corks are imported from Spain and Portugal, with five corks costing 2 cents. The winery employs twenty-four workers each day. 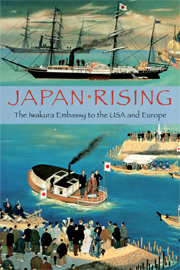 Wine bottles are made of crude glass. Even copper and iron slag can easily be used to make glass, so it would be quite possible to make the bottles in America. Why, then, do they import them from such a far-away place as France? French wine is a well-known product whose fame has spread and is acknowledged throughout the world. French wines are given names according to their regions of origin, such as ‘Bordeaux’ or ‘Champagne’, and in making and bottling wine Americans pretentiously borrow French names. Probably this is because the market is still poorly developed. In the practice of trade, reputation (that is, credibility among customers) is so highly valued that even millions of dollars in capital cannot compensate for its loss. A good business works to enhance its name year after year. The reason for foregoing short-term profits is to use the reputation or the name to add value. Bad business practices, on the contrary, sacrifice reputation and grasp at small immediate profits. If you compare results over a few years, there may seem to be no difference, but in the long run the difference in profit is like that between Heaven and Earth. This frequently happens. If a wine has a name which is well known, it will easily generate enough extra money to pay for the bottles. This principle is worth noting.

Although Japan has only recently begun intercourse and commerce with foreign countries, many items made in Japan are regarded as unusual and attractive by Europeans and Americans. Nevertheless, Japan does not profit from exports for the following three basic reasons: 1. The volume of exported goods is so small that it does not satisfy overseas demand; 2. Shipping is unreliable, and we have not yet established a regular presence and role in foreign markets; 3. Aiming only for short-term profits, we do not build any reputation or fame; worse, we even squander any recognition we may have won.

The example of the corks proves that spreading one’s reputation and promoting demand throughout the world creates profit and results in the volume of trade increasing tremendously. Corks are made from the bark of a tree (cork-trees were growing in the flower-beds in Woodward’s Gardens) and are exported from Spain and Portugal. In Algeria, in Africa, planting French cork-trees on about 350,000 acres of land yielded a profit of 10,000,000 francs a year. If cork-trees and corks can yield such profits, how large a business it must be!