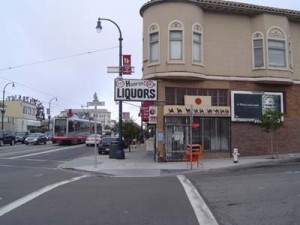 The journey of this day starts across the street from San Francisco City College. The bookstore has been reliably stocking and selling Cambridge titles as coursebooks since almost the year we came to America. The traffic light at Ocean and Phelan turns green, and I drive on. At Ocean and Plymouth, Homrun Liquors beckons wanly in the morning light, a reminder of a recent late-night post-buy cigarette pit stop with Paul Yamazaki, who lives a few blocks away.

I drive on. Turning left at 19th Ave., I glimpse the sprawling campus of San Francisco State, home to the SFSU Bookstore. Management here recently dispatched an edict to all vendors describing newly required terms at odds with those offered by most scholarly and small presses. I drive on. As 19th Ave. becomes Highway 1, briefly a multilane superhighway, I must decided whether to stay on the 1 as it becomes the coast road, or take the far more utilitarian 280-17 route.

The coast road is instantly lovely, winding over cliffs, through small towns, accessing secluded beaches, big blue waves just a few feet away. Depending on the time of year, fields are filled with pumpkins, brilliant flowers, or grasses grown for the delectation of some very (if briefly) lucky cows. However the road is two-lane most of the way, and one can never be certain exactly how long the 60 mile drive will take. Checking and re-checking the time, I know I will never make my appointments in Santa Cruz unless I take the regular commuter route. Interstate 280 glides along the crest of the coastal hills, marking the border between upscale suburban development on the bayside, the San Andreas fault and forests beyond on the oceanside. From San Jose, Highway 17 lurches quickly through ravines and over passes, taking the driver suddenly and swiftly to Santa Cruz.

Precisely one minute before the scheduled appointment time, I enter the Literary Guillotine. Several Cambridge titles are displayed in respectable stacks along the front counter. Leaning stacks of coursebooks and new arrivals populate every corner. The floor-to-ceiling shelves are completely full. The long tables beyond the cash/information island are as always creaking under the weight of multiple copies of every significant scholarly humanities title published in the last 6 months. There are perhaps twenty-five paces from front door to back wall — contentious and urgent thought sparkles and dazzles from every corner. David Watson and I work through the spring catalog, ask each other questions about backlist. He explains that the Norman O. Brown book coming this summer will probably be the last from his publishing project Literary Guillotine, Ink. He tells about the profoundly empty streets of downtown Santa Cruz during December, how he wondered if another customer would ever enter the store again. On this brisk mid-January day, his cash register is ringing often, to his great relief.

A good portion of the Humanities professors on campus give David their coursebook lists, and this surge of business a few times a year provides the revenue the store needs to carry on. As the meeting winds down, David tells me that someone from the UCSC campus newspaper is doing a piece on his store, and that she wants to interview someone in publishing who can speak on the subject, and that he recommended me. I am happy to have the opportunity to spread the word, and agree quickly. I drive on to my next appointment.

A few days later, back in Los Angeles, I am stopped in a parking lot along Santa Monica Boulevard, speaking with this young reporter on the phone. I ask her how she came to do this piece on David’s store, and she tells the following story. She and her editor wanted to do an expose on that store downtown where they are all ‘forced’ to buy their textbooks. She came downtown and spent long stretches of time in the store, spoke with David, spoke with eager and dedicated customers, and found she had a moment of clarity. Culture, ideas, and the fervent conversation about them matter! And this small space is where ideas are nurtured and encouraged and brought into the world! Like she had been let in on an important secret, and now she wants to know everything there is to know. We finish the conversation, I direct my car back into traffic, and I drive on to my next appointment.