If you meet Darwin by the road… 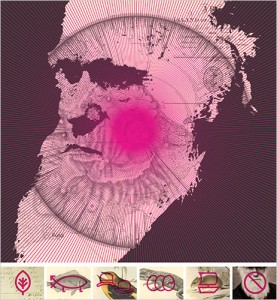 Today’s Science Times devotes itself to all things Darwin. His 200th birthday is 2 days away!

My personal favorite, Carl Safina’s essay entitled Darwinism Must Die So That Evolution May Live takes a stab at bursting the bubble of the cult of Darwin.

‘We don’t call astronomy Copernicism, nor gravity Newtonism. “Darwinism” implies an ideology adhering to one man’s dictates, like Marxism. And “isms” (capitalism, Catholicism, racism) are not science. “Darwinism” implies that biological scientists “believe in” Darwin’s “theory.” It’s as if, since 1860, scientists have just ditto-headed Darwin rather than challenging and testing his ideas, or adding vast new knowledge.’

And as Safina points out, we have. Evolutionary biology has advanced through genetics, developmental biology, and plain observation; through scientists testing and applying Darwin’s theories, not by repeating them over and over (like, say, a religious cult).

But the article also owes up to the rest of Darwin’s legacy — the one that we usually forget about, and something I’ve noticed when reading his correspondence.

‘In 1859, Darwin’s perception and evidence became “On the Origin of Species by Means of Natural Selection, or The Preservation of Favored Races in the Struggle for Life.” Few realize he published 8 books before and 10 books after “Origin.” He wrote seminal books on orchids, insects, barnacles and corals. He figured out how atolls form, and why they’re tropical.

‘Credit Darwin’s towering genius. No mind ran so freely, so widely or so freshly over the hills and vales of existence. But there’s a limit to how much credit is reasonable. Parking evolution with Charles Darwin overlooks the limits of his time and all subsequent progress.’