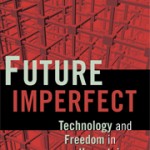 ‘Still, an Internet-friendly president could also mean one who is more exposed to different points of view by taking in information and opinions that aren’t filtered by his inner circle of advisers or the mainstream media, according to David D. Friedman, author of “Future Imperfect: Technology and Freedom in an Uncertain World.”

‘”One of the general problems of governments  . . .  is the gatekeeper problem,” Friedman said. “The person who controls access to the monarch has enormous power, and if you think about a modern society, the president can’t have a complete picture of what is happening in the world because various mechanisms are filtering.

‘”Obama looks like he is the first techie president,” Friedman continued. “He, like me, is used to using the Internet, and if he chooses, he could spend an hour a day wandering the Web to find out what bloggers who don’t agree with him are saying.”‘

Anyone out there using technology to push the political envelope? What’s the strategy?