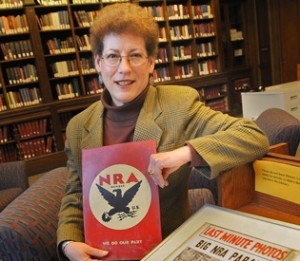 For historian Lizabeth Cohen, writing in Sunday’s Boston Herald, it’s natural to compare the circumstances as President Obama takes office to those of FDR.

The stock market is spiraling downward, the financial system is in chaos, and every month more and more people are unemployed or find their work hours cut back.

The tightening of credit means people who thought they were playing by the rules are having goods repossessed and homes foreclosed. Prices are dangerously deflating and businesses are failing at astonishing rates. The Republican president has insisted that private markets will solve the crisis and government should not intervene too aggressively.

Now, a new Democratic president is taking office, having been decisively and enthusiastically elected by American voters to experiment with new strategies to jump-start the economy. Political crises abroad make it imperative that the United States restore global stability. As the new president takes the reins of power, he recognizes how important it will be to communicate directly with the American people who sent him to Washington and avoid his predecessor’s isolation. To do this, he looks to a new media technology that helped catapult him to the presidency.

No, Franklin Delano Roosevelt in March 1933.

The parallels are startling. At the same time, however, it is important that we remember how 2009 differs from 1933. First, the New New Deal that President Obama is developing will have the benefit of the federal infrastructure that the first New Deal put in place – including unemployment insurance and Social Security. Sure, the regulatory tools need fixing, but they are ready at hand.

Second, the American economy in 2009 is different from 1933, in particular because of the greater importance of the service sector and because the work force includes more women and is better educated. That means that a New Deal that puts Americans to work repairing the nation’s deteriorating infrastructure has to define that infrastructure as more than bricks and mortar that will put male construction workers to work. It must also include, for example, schools, hospitals and high-tech projects that employ female computer programmers.

Finally, we fortunately no longer live with the Jim Crow racial hierarchy that haunted the first New Deal and excluded African-Americans from access to Social Security and the new fair labor standards because of their concentration in agricultural and domestic labor – occupations lawmakers intentionally excluded.

Nonetheless, it will be important to learn from the past and ensure that the jobs created by today’s economic stimulus package are available to all Americans. Despite elite fears at the time, desperate Americans were not seeking a revolution in the 1930s. What they wanted was a more moral capitalism that gave them a fair shake. I think Americans in 2009 want very much the same thing.

About the Author: Lizabeth Cohen

Lizabeth Cohen is the Howard Mumford Jones Professor of American Studies in the Department of History at Harvard University and author of books including Making a New Deal: Industrial Workers in Chicago, 1919-1939 (2008)...