This wasn’t necessarily the case back at the first 100-mark. I found an article from December 1908 decrying the lack of planned celebrations.

Call attention to the fact that the one hundredth anniversary of the birth of Edgar Allan Poe is approaching, and that no plans for celebrating the occasion appear to have been made. 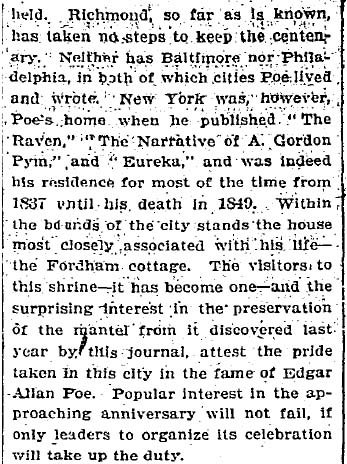 The Times piece, [excerpt at left], points out that there are several significant Poe cities, though the correspondent believes that New York is the “proper place for the chief celebration,” since “no love was lost” between Poe and the city of his birth, Boston, “nor is there likely to awaken there to-day a stir of enthusiasm for a man who called Longellow a plaigarist.”

Fortunately for those of us able to attend this time around, several cities have parties planned. The coolest one I could find is in Baltimore, involving, among other things, a wine tasting in the crypt of a former church. Yes, there will probably be Amontillado.

For the Poe uninitiated, check out our Introduction to Edgar Allen Poe — the perfect antidote to the unfounded rumors and speculation about Poe.