Yasheng Huang is a Pick of the Pile 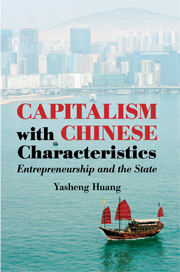 Capitalism with Chinese Characteristics is Huang’s analysis of entrepreneurship in China. It argues that China’s amazing economic growth was accompanied by a tightening of government control over what had previously been a thriving entrepreneurial culture in rural areas.

The Economist named Huang’s work among 2008’s best books. Why? Because it

‘[c]onvincingly overturns the usual analyses of the nature of China’s economy, and brilliantly predicts, a year ahead of other commentators, its steep decline.’

A surprising new book argues that China is becoming less, not more, of a capitalist economy

MOST people, particularly those living outside China, assume that the country’s phenomenal growth and increasing global heft are based on a steady, if not always smooth, transition to capitalism. Thirty years of reforms have freed the economy and it can be only a matter of time until the politics follows.

This gradualist view is wrong, according to an important new book by Yasheng Huang, a professor at Massachusetts Institute of Technology. Original research on China is rare, largely because statistics, though plentiful, are notoriously unreliable. Mr Huang has gone far beyond the superficial data on gross domestic product (GDP) and foreign direct investment that satisfy most researchers. Instead, he has unearthed thousands of long-forgotten pages of memoranda and policy documents issued by bank chairmen, businessmen and state officials. In the process he has discovered two Chinas: one, from not so long ago, vibrant, entrepreneurial and rural; the other, today’s China, urban and controlled by the state.

In the 1980s rural China was in the ascendancy. Peasants, far from being tied to the land, as has been assumed, were free to set up manufacturing, distribution and service businesses and these were allowed to retain profits, pay dividends, issue share capital and even a form of stock option. State banks rushed to provide the finance. Nian Guangjiu, a farmer from impoverished Anhui province, built up a business selling sunflower seeds (a popular snack), employed over 100 people and made a million yuan (nearly $300,000) in profit in 1986—just a decade after Mao’s death. Because most of this activity was set up under the misleading label of “Township and Village Enterprises”, Western academics largely failed to spot that these ostensibly collective businesses were, in fact, private.

Continue to the review >>