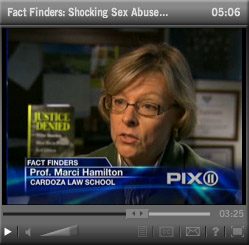 Justice Denied author Marci Hamilton just sent me a couple of stories of interest in the recent cases involving abused children in the Orthodox Jewish communities of Brooklyn.

Channel 11 news did a powerful piece yesterday on the current state of the investigation, and spoke with Marci about it.

The video can be seen here.

Meanwhile, TIME Magazine published the results of a study in The Lancet, a British medical journal, which makes the sad conclusion that most abuse cases still go unreported.

Some of the reasons for this, however, include the desire to avoid subjecting children to the child welfare system designed to protect them.

‘Children in highly developed countries suffer abuse and neglect much more often than is reported by official child-protective agencies, according to the findings of the first in a comprehensive series of reports on child maltreatment, published Dec. 2 in the British medical journal The Lancet.

‘Based on a review of research conducted on child abuse between 2000 and June of this year, researchers estimate that 4% to 16% of children are physically abused each year in high-income nations, including the United States, United Kingdom, Australia and Canada. As many as 15% are neglected, and up to 10% of girls and 5% of boys suffer severe sexual abuse; many more are victims of other sexual injury. Yet researchers say that as few as 1 in 10 of those instances of abuse are actually confirmed by social-service agencies — and that measuring the exact scope of the problem is nearly impossible.

‘The issue lies in the delicate nature of the crimes — and the consequences of intervention. Many cases of abuse are rife with potential for long-term harm of the child, whether or not the assault is reported. The decision to report is rarely clear-cut, says Theresa Costello, director of the National Resource Center for Child Protective Services, who was not involved with the new research. “Professionals want to advocate for their clients, but they also know the reality of the public child-welfare system,” she says. “There is a natural professional dilemma when you see a kid and you think, ‘I should make a report,’ but you’re not sure you want to subject that child to the system.”

‘Indeed, the second study in the Lancet analysis, citing previous research, reveals that physicians reported only 6% of children’s injury cases to protective services, even though they suspected the injury was a result of abuse 10% of the time. Further, researchers say that many more cases of maltreatment — particularly of sexual abuse — are never even suspected, and the victimized children never come forward to report the assaults.’