Aristotle May Provide the Key to Quantum Gravity 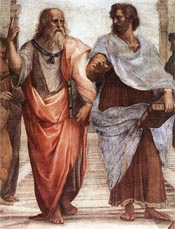 So far in these posts we have looked at testable quantum gravity effects, but I have not said much about the ultimate theory of quantum gravity itself. There is a simple reason: I do not think we have a compelling theory yet.

Rather, I think that this deepest and most long-standing of all problems in fundamental physics still needs a revolutionary new idea or two for which we are still grasping. More revolutionary even than time-reversal. Far more revolutionary and imaginative than string theory. In this post I’ll take a personal shot at an idea — a new kind of duality principle that I think might ultimately relate gravity and information.

The idea that gravity and information should be intimately related, or if you like that information is not just a semantic construct but has a physical aspect is not new. It goes back at least some decades to works of Beckenstein and Hawking showing that black holes radiate energy due to quantum effects. As a result it was found that black holes could be viewed has having a certain entropy, proportional to the surface area of the black hole. Lets add to this a `black-holes no-hair theorem’ which says that black holes, within General Relativity, have no structure other than their total mass, spin and charge (in fact, surprisingly like an elementary particle).

What this means is that when something falls into a black hole all of its finer information content is lost forever. This is actually a bit misleading because in our perception of time far from the black hole the object never actually falls in but hovers forever at the edge (the event horizon) of the black hole. But lets gloss over that technicality. Simply put, then, black holes gobble up information and turn it into raw mass, spin and charge. This in turn suggests a kind of interplay between mass or gravity, and information. These are classical gravity or quantum particle arguments, not quantum gravity, but a true theory of quantum gravity should surely explain all this much more deeply.

Here then is an idea from a Physics Essays article I wrote some 20 years ago, and now covered in my chapter of On Space and Time. Let’s start with the very simplest theory of ‘physics’ — and I don’t mean Physics 101, I mean at the level of my 1 year old son. At the moment he is busy (I think) naming things, dividing the 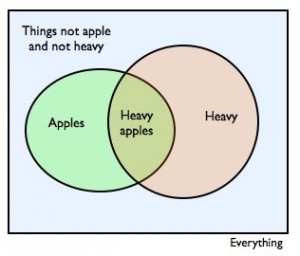 world into different classes of objects. Apples, pears, fire-engines … and learning about logical connectives such as ‘and’, ‘or’ and ‘not’. What I mean here, broadly, is the logical part of language as a description of the world, something which goes back to Aristotle, if not earlier. The theory consists of statements about objects falling into these various groups. And perhaps you have come across a useful ‘pictorial’ way of thinking about this called ‘Venn diagrams‘. Basically, fix some Universe of all possible things within some context, represented by box. Inside this box different groups of objects are represented as (possibly overlapping) regions.

Now, here is the neat bit. You can just as easily work with the complement of a region as the region itself. Thus if a certain region is called ‘apples’ then its complement ‘not apples’ is some other perfectly good region or concept. Although not formalised till many centuries later in the work of the British mathematician de Morgan, classical logic at this level has a deep symmetry in which speaking about a class of objects is equivalent to speaking about its complement:

“This is not an apple or an orange” is equivalent to “This is a not-apple and a not-orange.” 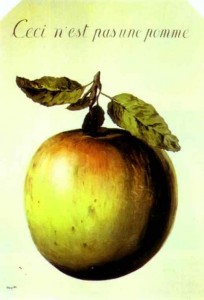 This is not an apple

It would be quite cumbersome but we could systematically replace the concept of apple by the concept of not-apple in all of our language. In working with complements you have to interchange ‘or’ with ‘and’ (as in the example above) and ‘nothing’ with ‘everything’ (within some context) and so forth. It is a transformation of the whole way that we talk about the world. In the case of apple and oranges it’s obviously better to work with a ‘localised concept’ than with the delocalised ‘not-apple’ but what about adjectives such as ‘heavy’ where there is less of a bias? “This is not a heavy apple” is equivalent to “this is either not an apple or it is not heavy.”

Even among material things it might not be so clear cut. For example, spacetime is all pervasive and in geometry we tend to speak in terms of points where a common property of spacetime is not true, such as where the curvature is singular. So we could imagine an alien race of people who use language in a reversed way to us and at the level of Aristotle and logic, they will have a transformed but equivalent view of the world.

Clearly this complementation-symmetry of logic is lost in more advanced theories of physics. It was lost as soon as Newton discovered gravity, because real apples cause gravity (curve spacetime as we say these days) while not-apples need not.

My proposal is that in quantum gravity something like this complementation symmetry should be restored.

How might this work? As I explained in one of my early posts, in our modern understanding of gravity you cannot put more than a certain amount of mass into a given volume. If you try it just forms a black hole. If you put in more mass, it just gets bigger. From the point of view of our alien race this statement will appear to them as something else entirely. Remember that they think in terms of object which are the non-presence of our objects. So, they might say something like: a region of space cannot be completely empty of their matter (totally full of not-matter from their point of view). This could be for them a limitation of their quantum theory. 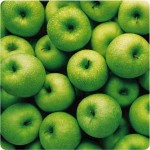 I explained in my post on dark energy that quantum theory suggests a ‘sea’ of virtual particles even in what is thought of as empty space and that a small `minimum energy density’ also seems to be observed by cosmologists. It is true that our theoretical understanding fails to match experiment by a factor of some 10123, but I think this just reflects our total lack of understanding of quantum gravity. What I think we see is at least a hint that our gravity should appear in the alien race’s complementary language as something like their quantum theory and vice versa. That is also why one needs quantum gravity to hope fully to realize it. This reversal of viewpoint symmetry may also tie up with ideas about time-reversal.

While this idea remains vague and speculative, there is supporting evidence at the level of mathematical structure. In quantum theory the more appropriate kind of logic is ‘intuitionistic’. It means that we drop the law of logic that says that either something is true or its complement is true. So we do not have just the options for something to be an apple or a not-apple. Thus, in the famous thought experiment known as ‘Schroedinger’s cat,’ one has a cat in a sealed room that will be killed by release of a poison gas if a certain radioactive decay occurs. (This kind of thought-experiment would not be allowed today, by the way.) From

our vantage point outside the room the cat should theoretically be in some kind of mixed quantum state neither dead nor alive until we look inside and see if the decay has taken place. In quantum theory, one can have (linear) combinations of complementary statements.

If this idea for quantum gravity is correct then the complementary concept, cointutionistic logic, in which one drops the law of classical logic that ‘a statement and its complement cannot both be true’, should be the first step in geometry (which, ultimately, becomes gravity). Indeed, in geometry a region does have an intersection with its complement, known as the boundary of the region. Going back to the Venn diagram, the perimeter of the regions have no structure in classical logic as there is no intersection of the set and its complement, but allowing it is arguably the birth of geometry.

There is in fact a school of category theorists led by mathematician F.W. Lawvere who have looked at ‘cointuitionistic logic’ as a conjectured ‘birth of geometry’. Incidentally, I met Lawvere once at a conference in 1991. He took me aside over lunch and told me that while he liked my conference talk, he asked whether I had read Lenin who, apparently, had proposed something related to my duality ideas. Its admittedly been on my `to read one day’ list since then. 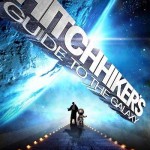 And if appealing to top mathematicians does not convince you, how about Douglas Adams? Replacing a set by its complement becomes in probability theory the idea of replacing a probability p by 1-p. There are certain solid-state systems where such a transformation is a symmetry and I am proposing something similar in quantum gravity. But if you have read Hitch-Hikers Guide to the Galaxy (or better still, listened to the BBC radio script which is far more hilarious than the books or TV show), you will of course be reminded of the Heart of Gold with its ‘infinite improbability drive’ famously powered by reversing probabilities. Douglas Adams’ comic genius is not in dispute, but could he also have touched upon a truly deep idea for quantum gravity?

Only time will tell.