If the real world, at its base, is quantum, then should we not think with quantum logic?

Shahn Majid discusses how the notion of quantum symmetry coming out of modern ideas on space and time could provide clues to the workings of a truly quantum computer. 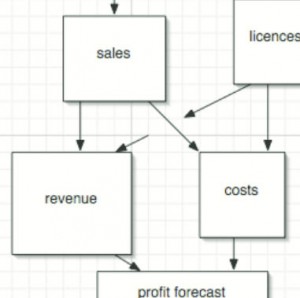 Does it matter whether the arrow ‘passes under’ the other arrow or ‘jumps over’ it?

If you are an engineer you could ponder the same question for a schematic for the wiring of a computer. In fact you could ponder the question when actually building a computer: does it matter if this wire connecting to that chip jumps over or under this other wire? If you thought it did matter, you would have discovered quantum computers as well as quantum symmetry!

Let me start with the symmetry. Truth, symmetry, beauty! The cornerstones of mathematics, some would argue of the very concept of knowledge. Surely, nothing could be deeper or more self-evident than the notion of symmetry — of finding patterns. But what if our usual conception of symmetry was not quite right? As scientists we should not be afraid to question even the most basic of assumptions. After all, Nature does not know or care what maths is in maths books, and maybe Nature is just a lot more imaginative than anything we have so far thought of. 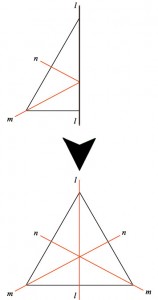 Well, I do think that the usual notion of symmetry is not quite right and for reasons tied up with space and time, the topic of my multi-authored book On Space and Time. The point is that spacetime itself appears to be quantum. As part of that, we can expect that space is also typically quantum. Now, the notion of symmetry grew out of things like reflections or rotations of objects in space. Patterns are usually patterns in some space. This is by no means exclusive but at least for basic examples like these, the notion of symmetry therefore needs to be correspondingly quantum. We need a new concept, quantum symmetry.

What is a quantum symmetry then? The current thinking is the following. Normally symmetry transformations can be composed, so we should have a ‘product’ into which the data for two symmetry operations are fed, say at the top of the ‘box’ and the composed result comes out at the bottom. We are taking a ‘flow chart’ view of mathematics here. So we have boxes or ‘gates’ that compose or multiply.

What is new and most unexpected is another operation which has one leg coming in at the top and two legs coming out at the bottom. This is called a ‘comultiplication’. For ordinary (not quantum) symmetries such a box is taken for granted and you don’t even notice it: when in a flow chart or calculation you use the same data twice, you just duplicate it. Such a duplication or ‘xeroxing box’ has information coming in and two copies of it coming out. A quantum symmetry allows more complicated comultiplications subject to rules of compatibility with the multiplication. Its a neat idea and it works — it allows for example to describe the quantum version of Einstein’s special relativity as a quantum symmetry of the quantum spacetime from last week’s post. But once the genie is out of the box, the idea of a quantum symmetry is very powerful and turns up all over the place.

How does this all relate to quantum computers? In a usual computer you also have boxes — silicon chips — processing data. In a quantum computer the idea is to replace the digital — 0 and 1 — data by quantum state data. So analog or vector data flows along the wires of the flow chart, if you like. It turns out that the superposition of classical data allowed by this makes such quantum computers fundamentally faster in principle than ordinary ones. Many groups in the world are actively trying to build elements of quantum computers, for example the NEC gate announced in May last year.

It might take while to make functioning gates, but it seems to me that the next problem is then concatenating gates. What is the analogue of a `copper wire’? How do you ‘transport’ quantum information? In the NEC gate, for example, the gate is charged by an external microwave pulse. All very well, but you need to be able to feed the output of one gate into the input of the other without external equipment. This is a much tougher problem and I suspect the answer is that, well, you just don’t have any wiring!

Years ago, there was an ancient SciFi series ‘Space 1999’ where the computers were amusingly made of translucent blocks that you could stack up one on the other. So information is conveyed by juxtaposition. I would argue that this is a much better model for a quantum computer. Going back to our flow chart at the start of the post, it means that the arrow crossings themselves have to be boxes with two legs coming in and two legs coming out. Actually we need two such boxes, for whether the left hand information flows under or over the right hand information. We have a fair idea from the theory of quantum symmetry how these ‘cross-over’ gates should behave. Then, once built, we could compress up all our computational flow charts into touching boxes. Now more wires! I guess I am predicting that this is how quantum computers will actually be built one day, perhaps next century. 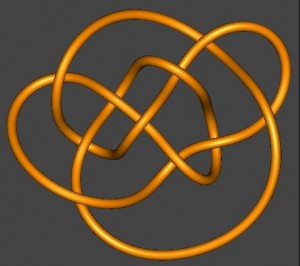 Back in the here and now, in fact some 20 years ago, there was a revolution in knot theory in which Vaughan Jones, for which he got a Fields medal, figured out how to associate a function to a picture of a knot as a way to tell if it is knotted.

Jones’ method can be viewed as an example of a quantum computer closely related to the first true examples of quantum symmetry. One reads the knot from top to bottom with a cross-over box each time one part of the knot crosses over the other. The kinds of quantum computers that I have been talking about are similarly ‘topological’ and can be represented by knots with additional boxes or nodes on them and additional strings coming into and flowing out of such nodes, as we discussed.

There is one more thing I would like to leave you with. Notice that quantum symmetry restores a kind of ‘input-output symmetry’ since as well as being able to combine or ‘multiply’ information you can also uncombine or ‘comultiply’ it. All the rules are symmetric between the two. It means that you can take a computation with quantum symmetries as flow charts, turn the chart upside down, and you have another valid computation with the roles of multiplication and comultiplication flipped. If such quantum symmetry ‘duality’ ideas are fully manifested in quantum gravity they would, I argue in my chapter of the book, be related to a deep duality between quantum spacetime and gravity or between the macro world and the micro world. This also suggests some deep ideas about reversing time, which the small margins of this blog are too small to contain (to paraphrase Fermat)…