This continues Don Albers’ long interview of Gardner from last week. Or, start from the beginning.

DA: In 1979, you talked about retiring from Scientific American that year, because you were going to turn 65. Some of us expressed real sadness at the fact that you weren’t going to be cranking out those monthly columns anymore. You said that there were other things that you really wanted to write about that you were afraid you were never going to get to unless you gave up the columns. You’ve had a lot of time to do that and you’re written quite a lot since then. 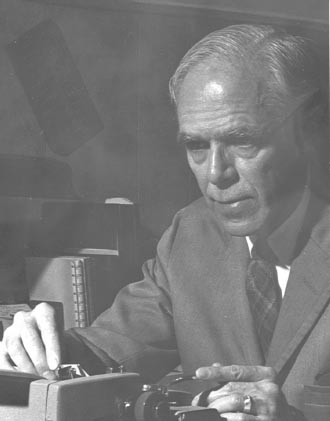 Gardner: Well, I do a regular column in The Skeptical Inquirer, and those columns get reprinted in books. There’s one due out in another month. Norton is doing a collection of Skeptical Inquirer columns. My editor there is Bob Weil who earlier was at St. Martin’s. Now he’s a top editor at Norton. He thought of a great title for the book—“Did Adam and Eve have Navels?” That was one of my columns. It’s a very perplexing problem for Biblical fundamentalists. It’s hard to figure out, because if they had navels it indicated an event that never took place. And of course it applies to hundreds of other things too. Did trees in the Garden of Eden have rings? If they were really trees, they had to have rings, but the rings indicate growth over time, alternate winters and summers.

DA: So how did you deal with the navel problem?

Gardner: I just sort of give a history of it, and various opinions that theologians have had toward the problem.

DA: I’d never heard that posed as a problem before, but I can understand why it would drive some people crazy.

DA: I wanted to ask you a little bit about some of your own favorite authors. You’ve revealed the names of some of them in your writing. Chesterton, for one, must be pretty high on your list.

Gardner: I’m very fond of Chesterton, without, of course, buying his Catholicism. I’m not a Catholic. Chesterton didn’t convert to Catholicism until rather late in life. I admire Chesterton mainly for his fiction. His masterpiece was a novel called, The Man Who Was Thursday. I recently annotated it for a Catholic house, because only a Catholic firm would have allowed me to annotate it. Ignatius Press is a Catholic publisher in San Francisco. Last year they published the, The Annotated Thursday. This is a fantasy novel by Chesterton, and I think it’s a masterpiece; it’s all about free will and the problem of evil. I could tell you the entire plot but it would take a while. It’s about a man named Sunday who’s running an anarchist organization in London. Chesterton wrote this at a time when anarchism was a big deal. The council of this anarchist society is made up of seven men who are named after days of the week, and this is about the man who was Thursday on the chief council. But it ends up as a theological fantasy and Sunday becomes a symbol of nature, which has a good and evil side. It’s a very complicated philosophical novel. I recommend it entirely, and, of course, Chesterton is mostly famous for the Father Brown books. I did annotate a Father Brown book, published by Oxford. There were six Father Brown books. The first was called, The Innocence of Father Brown, and I did an annotated edition. I’ve done introductions for Dover to a number of Chesterton’s other books of fiction. 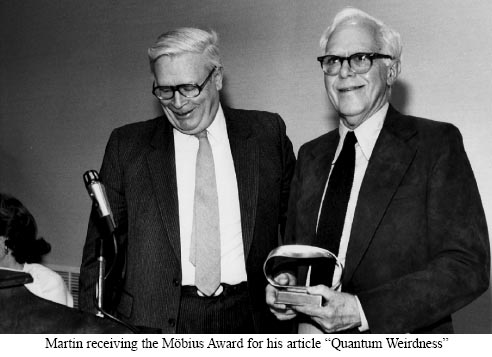 Another of my favorite authors is H. G. Wells. Wells and Chesterton were friends, and you can’t imagine two people who were so opposite in their views because Wells was an atheist. In his youth he went through a brief period believing in the finite god concept, the concept of a limited god, then he outgrew that and became an atheist. Chesterton, of course, converted to Catholicism, and became a devout Catholic.

My wife Charlotte and I were a mixed marriage, by the way. She was Jewish, but we were both philosophical theists. When we got married, I wanted to affiliate with a reformed synagogue, but Charlotte refused because she had no beliefs in traditionalJudaism, any more than I have in Christianity. She countered by saying that we could join a Methodist Church, since my background was Methodist. I refused. So we didn’t go to any church, but we profess a kind of philosophical theism which enables me to admire many religious writers like Chesterton.

DA: Do you think that there may in fact be a larger body of people out there who, whether they know it or not, are philosophical theists?

Gardner: I think so, yes.

DA: But for whatever reasons, they don’t find it wise or comfortable to say things like that.

Gardner: That’s right, absolutely. There are a lot of closet philosophical theists. I just wrote a long review of Gary Wills’ new book, Papal Sin, a vigorous attack on the Catholic Church, on the hierarchy. He is a devout Catholic, but he doesn’t believe in any of the unique Catholic doctrines. He doesn’t believe in the Immaculate Conception, he doesn’t believe in the Virgin birth, he doesn’t believe in the Assumption of Mary, and he doesn’t believe in Papal infallibility. So I praised the book, in a review for the L.A. Times. I end it by saying to Wills “We need to know what you really believe.” I give a list of six questions I would like for him to answer, and of course he’s not going to answer any of them. I say that this mystery about what he really believes hangs like a kind of gray fog over everything he writes about religion. He’s written several books about religion, all of them a blast at Roman popes and traditional dogmas. I can’t imagine why he calls himself a Catholic. He wants to reform the Church. Of course, he’s not going to.

DA: Not with all of those points of attack under his belt.

Gardner: He has harsh things to say about Pope John Paul. Wills started out as a friend of William Buckley, and his first job was working on the National Review. He had been in a Jesuit seminary until he left the seminary to take a job as a book reviewer and drama critic for Buckley. They became good friends, but now they’re at opposite poles. Buckley believes all the Catholic doctrines; he’s an ultraconservative Catholic. He did a book recently, a confessional. Buckley is more conservative in his religious views than he is politically; he’s ultra orthodox. He’s even mad at the church for dropping the Friday prohibition on meat eating. Nearer, My God is the title of Buckley’s latest book, the first he’s written about his religion opinions. I reviewed it unfavorably for the L.A. Times. 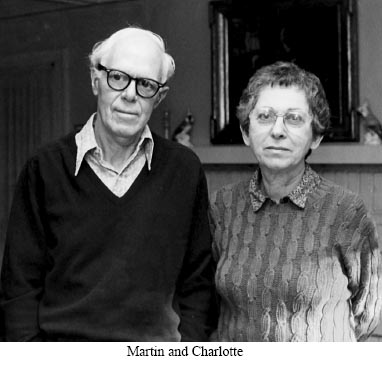 Gardner: The count is rather vague because some of the books I’ve written are pamphlets or booklets, in the magic field. You don’t know whether to call them books or not, because they are more like paperbound booklets that may be only 50 pages or so. But if you consider hardcover books, it’s about 60.

DA: By any standard, that’s a lot.

Gardner: Of course I’m far behind Isaac Asimov; he did over 300. I got to know Isaac pretty well when I lived in New York. We belonged to a very strange little group that met once a month called the “Trap Door Spiders.” Did I ever tell you about that?

Gardner: It started out as a group of science fiction writers, about 20 members, all male, who met once a month. Wives are not invited. Members take turns sponsoring the dinners. The person who sponsors the dinner gets to invite a guest. After the dinner is over the guest is put on the hot seat and you can ask him or her any question. A female can be aguest, but not a member of the organization. Members included Lester Delray and Fletcher Pratt, a couple of top science fiction writers. I got myself voted in. You can become a member only when a member dies. It’s sort of a secret organization. Isaac was one of the members, so I got to see him every month when we met for dinner.

Isaac wrote a series of mystery stories based on the “Trap Door Spiders,” called theBlack Widow Spider’s Mysteries. They appeared first in Ellery Queen’s mystery magazine, and later came out as books. They’re very funny stories, very Chesterton-like, they’re similar in some ways to the Father Brown stories in the type of gimmicks Asimov uses. Every story follows the same pattern of the Black Widow Spiders having these monthly dinners in which they invite a guest, but in Asimov’s stories the guest has to be someone with a mystery that needs to be solved, not necessarily a murder mystery but some type of mystery. So the guest tells all the details about the mystery, then the members of this club bring their experiences to bear and try to figure it out. The mystery is finally solved, and this is in every story, by Henry the waiter. He serves the dinner, and listens to everything everybody says. They’re very close to solving the mystery, but they can’t quite solve it, and so Henry says, “Have you gentlemen considered…” and Henry finally solves it. Every story follows that pattern. When I was living in New York I brought Steve Kanfer, who was a neighbor of mine, as a guest and they voted him in as a member. He has just hit the jackpot with his biography of Groucho Marx. You’ve probably been reading about it.

DA: Yes, there was a front-page review of it in New York Times Book Review a few weeks ago.

Gardner: Yes, it’s doing very well. Kanfer, a former book review editor of Time, lived in Hastings-on-Hudson a few blocks from us; I got to know him well. He recently sold movie rights to his Groucho biography.

DA: Who knows, you may get movie rights to one of your books.

Gardner: No, I was hoping maybe my Oz book would be a candidate, but nobody picked it up. Naturally I think it would make a great movie.