A Place for “Ruthful”

Ruth Wajnryb is WORDS columnist for the Sydney Morning Herald. Her new book, You Know What I Mean? plumbs the depths of language, and the shifty, slippery meanings of our words. Here, a meditation on her own first name.

Although you probably have less reason than some to look up ‘ruth’ in the dictionary, doing so can be a learning experience. 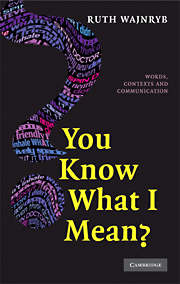 You’ll find it is an archaic common noun meaning ‘pity’, ‘mercy’ or ‘compassion’. It derives from the Middle English ‘rue’ (pity), which we still use for the odd curse, as in ‘you’ll rue the day you were born’. Granted, this is not heard a lot these days, probably because in a comparable circumstance we’re more likely to pull out a handgun than invoke the powers of a curse.

These days ‘ruth’ is mostly recognisable in ‘ruthless’. It’s rather sad, don’t you think, to be present only through negation? It wasn’t always so. Remember Biblical Ruth? She who worked the fields by day and spent nights sleeping at the foot of Boaz’s bed, waiting for him to make a move. Which he did, though not before she’d got through a lot of wheat. That story, told to me as a child, has left me grudgingly respectful of the unrapacious Boaz, guided as he was by ethics rather than opportunism.

Now, you will no doubt have noticed my ‘unrapacious’. There’s no such word, of course, but my meaning is pretty transparent, I bet. After all, rapacious is a hit-you-in-the-eye kind of word, and ‘un’ is the conventional semantic reverser. You don’t need a huge imaginative leap to place Boaz closer to the ‘New Man’ end, rather than the Genghis Khan end, of the pillaging and rampaging barometer.

As a reverse marker, ‘un’ is less than totally dependable. We can use it to reverse ‘happy’, ‘cooperative’, ‘lucky’, ‘sure’ and ‘realistic’ (among many more), but not ‘sad’, ‘solemn’, ‘serious’ and ‘savage’ (among others).

Verbs are equally unpredictable. We can uncage, unbutton, unbrace, unfasten and unbind, but we can’t ‘unbreak’ (even hearts), ‘uncalculate’, ‘unsteal’ or ‘unspeak’ (even Nixon). Some things, once done, cannot be undone. Then there are words where the verb is disallowed (‘unbreak’) but the related adjective works (‘unbroken’). Similarly, we have ‘uncensored’ but not ‘uncensor’, ‘unloved’ but not ‘unlove’, ‘unrivalled’ but not ‘unrival’. The suffixes ‘-ful’ and ‘-less’ have their own pattern. Take a noun (such as ‘hope’), add ‘-ful’ for plus quality or ‘-less’ for minus (‘hopeful/hopeless’). So too ‘useful/useless’, ‘cheerful/cheerless’, ‘remorseful/remorseless’, ‘mindful/mindless’ and thousands more.

But of course exceptions exist; indeed they thrive. A room may be windowless but not ‘windowful’. We can be limbless or limbed, but not ‘limbful’ (unless perhaps we’re particularly leggy). We have ‘awful’, but not ‘awless’, though there’s always ‘awesome’. One may be mournful but not ‘mournless’. We say ‘a handful’ of coins, but not ‘handless’, unless we’re speaking of an amputee, and then we’d probably search for a euphemism, like ‘manually challenged’. We have ‘shedful’ for a vague large-quantity marker but ‘shedless’ has little currency, except for a category of male persons deprived, perhaps because of apartment living, of the standard Australian solution to the testosterone-based need for a tool-storage place.

My father used to have great fun creatively adding ‘-fuls’ and ‘-lesses’ wherever he thought they might have something to offer. He’d add ‘-ful’ to an adjective like ‘patient’, making ‘patientful’, with the intention of creating a meaning of bonus-quality patience. Ironically, his foreign accent gave him privileges denied the native speaker. Oblivious to the twinkle in his eye, people would let such usages slide, probably thinking, ‘poor migrant, doesn’t know better’. Perhaps this biographical remnant accounts for my being inordinately bothered by the fact that the quality of compassion in ‘ruth’ is used today only to mark its absence. We’ve lost both ‘ruth’ and ‘ruthful’, no doubt casualties to the only-bad-news-is-newsworthy mindset. Granted, governments, armies and cyclones perform ruthless acts. But what about nuns in ruthful bids to save souls? Or researchers toiling ruthfully for cures? Or politicians seeking ruth for human rights?

Some say our words shape our perceptions, and without a word like ruthful we’d probably not recognise ruthfulness, even under our noses. Others say our words expand to accommodate our needs. Accordingly, the hill tribes of Papua New Guinea will develop their own words for ‘email’ and ‘download’ if and when the need arises. The logic here would have it that if we don’t have ruthful or ruth, it’s because we don’t need them, or because there’s not enough of the quality of ruth around to warrant its own word.

About the Author: Ruth Wajnryb

Dr. Ruth Wajnryb is the author of You Know what I Mean?: Words, Contexts and Communication (2008). Wajnryb is an applied linguist, researcher and writer, with a weekly column, WORDS, in The Sydney ...