Continuing from last week, we’ll continue with Don Albers‘ 2004 interview with Martin Gardner right where we left off: 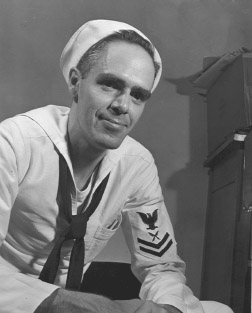 DA: In December of 1941, the U.S. entered World War II and you enlisted in the Navy.

Gardner: I ended up serving on DE 134, a destroyer escort, in the Atlantic. I was miserably seasick for about three days, and then I was never seasick again. I couldn’t wait for the war to end, but later I looked back at it as a rather pleasurable time of my life. You’re on a ship, you make friends with your shipmates, you got liberties now and then, and you didn’t have to worry about anything.

I’ve had migraine headaches all my life that were fairly severe when I was in high school. When I enlisted in the Navy, I did not list my migraines because I was afraid they wouldn’t take me. I feared that I might develop migraine headaches during battle situations. We were part of a so-called “killer group” of six destroyers looking for German submarines. During my four years in the Navy, I never had a migraine headache. I’m convinced that they’re associated with periods of anxiety. When you’re in the Navy, you don’t worry about what you’re going to do tomorrow, what tie to put on, etc. You just follow orders. In a way, you have a big sense of freedom. Otherwise, I have no other explanation. 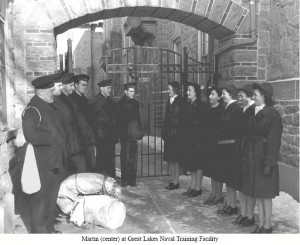 DA: But when the war ended, you were glad to get out.

Gardner: At the time I was glad to get out. I was the yeoman who decommissioned the ship in Green Cove Springs, Florida. It was what they called a ‘Caribou’ for six. We worked together, sweeping and looking for German subs. When they were mothballed in Florida there was one missing; it got torpedoed and sunk.

DA: Over what period of time were the six DE’s together?

Gardner: The whole time I was on the DE.

DA: Which was how many years?

Gardner: About three years. Before going to sea, I spent about a year at Madison, Wisconsin, which had a radio training school there. I handled public relations for the school, and edited a school newspaper.

Gardner: Yes, they were. We were very lucky. This happened before I joined the DE, but when I went aboard the sailors were all talking about it. The group actually captured a German submarine early in the war, intact, and towed it back. It was top secret, nobodyknew about it. Now that submarine is on exhibit at the Museum of Science and Industry in Chicago. I had the pleasure of walking through it one day when I was in Chicago. But that happened before I was on the ship; I missed that action. But we did take back a German submarine at the end of the war that surrendered to us.

The Horse on the Escalator

DA: So then you were mustered out, and promptly went back to Chicago. 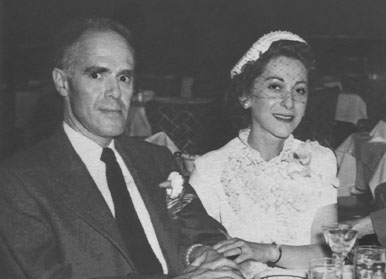 Gardner: Yes, I went back, and I could have had my old job back in the public relations office at The University of Chicago because there was an understanding that if you enlisted in the service you could get your old job back. But the one reason I didn’t go back to the PR office was that I sold a story, my first sale, and it was to Esquire Magazine. It was a short story, called “The Horse on the Escalator.” It was a humorous story, a crazy story. It was about a man who collected shaggy dog jokes about horses, sort of nonsense jokes about horses. The title of the story, “The Horse on the Escalator,” came from a joke going around at the time about a man who entered Marshall Field’s department store on a horse,and the elevator operator told him he couldn’t take the horse on the elevator. And he said, “but lady, he gets sick on the escalator!” That was the shaggy dog joke about a horse. And that was the title of my story. It’s a story about a man who collected horse jokes, and his wife didn’t think any of them were funny, but she laughed heartily every time he told one to conceal the fact that she didn’t think they were funny. So that was my first story, and that was the first time I had gotten paid. I had articles published before in little magazines, but they didn’t pay anything. I decided that maybe I could make a living as a freelance writer, and I very quickly sold Esquire a second story, and that was the “No-Sided Professor,” about topology. That’s one I had anthologized a number of times. So all of a sudden I was making pretty good money, and I lived on sales to Esquire for about a year or two. I sold them about 12 stories. They’re collected in a book by the way, titled The No-Sided Professor and Other Stories. Not all of my Esquire stories are in there; a few that I didn’t think were very good were left out. Some of the stories are from other magazines.

DA: Here’s the book, and here’s “The Horse on the Escalator.”

Gardner: That was my first story (laughing). By the way, it includes a long poem in free verse that I wrote about the ship I was on. It’s called, “So Long, Old Girl.” My son Jim called me a few weeks ago to ask if I had ever written a poem about a ship. And I said, “yes.” He said “did it have something about girls in it?” And I said, “yeah, why do you ask?” He has a son William who is interested in dramatics, and was trying out for a part at some dramatics school. Someone else, who was also trying out for a part, recited that poem. William said, “I think Grandfather wrote a poem about a ship. Somebody recited a poem, something about a ship called girl.” How he ever found that poem I don’t know. He must have picked it up from the book collection. I have written two other books of fiction. You probably know about them.

Gardner: You actually read it? My goodness!

DA: To what extent is it autobiographical?

Gardner: It is partly autobiographical. I don’t resemble Peter, the book’s hero, in personality or looks, but I did put him through changes in my own beliefs because when I was in high school I was converted to a very ugly Protestant fundamentalism, mainly through the influence of a Sunday School teacher who was later a counselor at a summer camp I went to. That didn’t last very long, but it lasted long enough for me to try to figure out some way I could preserve a belief in Christianity. I finally ended up deciding I couldn’t. So I put Peter through changes in my own beliefs, and in that sense it’s autobiographical.

DA: It’s a book you seem especially fond of. What motivated you to write it?

Gardner: I wanted to put into a novel my reasons for abandoning Christianity, but retaining a belief in God. I’m what in academic circles is called a “philosophical theist.”

Learning to Read with Oz

The other fiction book I did, you might not know about, is an Oz book that I wrote last year. I grew up on the Oz books, and I was really fond of them. I’ve done introductions to a lot of Dover reprints of books by L. Frank Baum, author of The Wizard of Oz. My Visitors from OZ is an imitation of an L. Frank Baum Oz book. The Klein Bottle runs all the way though this book. In one of Baum’s Oz books, he had Glinda cast a spell over Oz, making it impossible for outsiders to visit Oz again. I argue in my Oz book that the spell that Glinda cast was moving Oz through a higher dimension into a parallel world. I used the science fiction concept of a parallel world, separated though the space of a fourth dimension. 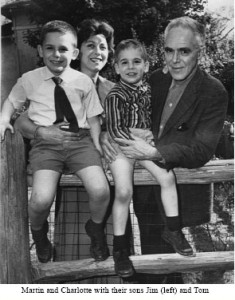 The basic plot of this book is about how Dorothy and the Scarecrow and the Tin Man visit New York City to help publicize a new movie about Oz. In order to get from the parallel world to Central Park, they make use of the Klein Bottle, because it’s open in the fourth dimension. So they slide though the Klein Bottle, and drop out through the spot where it’s going though the Fourth Dimension. That lands them into an adjacent parallel world, into Central Park. They use that to get to Central Park, then they use it to get back to Oz. The Klein Bottle, by the way, is made by a fellow named Ku-Klip. He’s the tinsmith who put the Tin Woodman together after the Woodman chopped his fleshly body to pieces with an enchanted ax. By the way, the book is doing much better in England than it is here, which is curious, you know, because Baum is an American author, and the English don’t know much about Oz. All they know is the Judy Garland film. This book had very few reviews, and the one review it got in the Washington Post wasn’t very favorable. The reviewer called it a “poor thing of a novel.” On the other hand, the London Times gave it a full-page admiring review.

DA: When do you think your writing interests first appeared? Originally you said you were going to do physics, but then you ended up going to Chicago, where you discovered philosophy. Your first job was with the Tulsa Tribune as a reporter. When did the writing bug really hit you?

Gardner: Oh, I think not until I got out of the Navy, and that is when I started selling stories to Esquire.

DA: But you were writing before then.

Gardner: Yes, news releases and other minor stuff, but nothing of any great importance. I had some fiction published in “little magazines.”

DA: This was the Depression, and that had something to do with it. But why would you take a job as a reporter, because that’s deadline writing?

Gardner: It just happened to be available at the time; it was an opening. As a low-level job, I think I made $15 a week.

DA: So you had your own particular passion for writing.

Gardner: No, not especially.

DA: But then you went on to write news releases at The University of Chicago.

DA: After the Esquire piece, you sold more stories to Esquire. That had to give you a lot of confidence, helping to convince you that you could earn a living as a writer.