Does American liberalism have a future?

The overriding question of James Flynn’s latest book is so great that he’s named his book after it: Where Have all the Liberals Gone? His conclusion: liberals in the US need to show more courage in confronting the rhetoric and policies of the out-going administration, or they’ll prove themselves to be complicit. And that doesn’t mean pacifism or inaction, either.

The question I have posed has a simple answer:  not as long as liberals allow their opponents to define political reality.  Ring wing dominance of American politics is easy to understand: popularize a hysterical image of a dangerous world; devote surplus government revenue to ensure “national security”; thus evade a debate about domestic priorities that you might lose; thus leave a vacuum to be filled by trivia such as prayer and gay marriage. This is not to accuse the right of duplicity.  Political actors usually manage to believe whatever maximizes their influence.

It is hard to tell whether American liberals have lost their voice because they lack courage or because they half believe in the same picture of reality.  That they have forfeited their tradition of social reform is shown by the paucity of their hopes for an Obama victory.  These amount to little more than damage control, that is, cleaning up the worst of the messes that the Bush administration has created.  Get US troops out of Iraq, not attack Iran, regulate the financial sector, and manage the coming recession.

The right-wing image of the world is absurd: America is safer than at other time over the past 80 years.

No other nation qualifies as a great power and those that come closest, Russia and China, are not expansionist but inward looking.  No “rogue” state is mad enough to launch some feeble attack on America to be obliterated in return.  Even Stalin with his huge nuclear arsenal was not that mad.  Hostile subterranean groups are relatively weak and can be combated cheaply and effectively.  They may have one or two more successes over the a period of decades, but the casualties they have inflicted thus far are less than those America has chosen to inflict on itself by pointless wars.  Let us look at some of the rhetoric that emasculates liberalism.

No liberal should use that phrase. Terror, or attacking targets by stealth, is something that all peoples use when they have a sense of injustice and cannot compete using conventional arms. America should take steps to be “free from intimidation”. The handful of subterranean groups hostile to the United States must be infiltrated. When states allow such groups to establish bases, those bases should be bombed, without consent if necessary. This means that the invasion of Afghanistan was a mistake and Obama is wrong to shift troops there from Iraq. Bases there and those in Pakistan are legitimate targets. Sending American troops into such states is costly and ineffective. 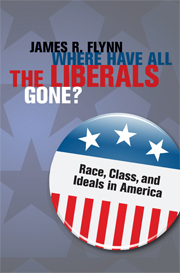 There are no rogue states, only badly governed states some of which have the capacity to develop a limited nuclear force, mainly to “balance” that of a neighbor (Iran and Israel – India and Pakistan).  As for a regime that has actually threatened America, Saudi Arabia is preeminent.  Her “Islamic charities” financed Al Qaeda.  That the US has taken so long to eliminate this threat is inexplicable.

That is a legitimate objective.  Letting Israel annex more and more of the West bank by settlement is not.  Unless Israel immediately puts all new housing starts there under the jurisdiction of the Palestinian authorities, the US should withdraw its support.  Only if Israel actively helps to create a Palestinian state, possible by unilateral steps that can be taken at any time, can moderate Arab opinion be reconciled to its existence and US support for its existence. So long as America is an uncritical ally of Israel, our nation cannot hope to be regarded as a neutral influence in the Arab world, much less a benign one.

The Russian threat.  The Expansion of NATO (the North Atlantic Treaty Organization) to include the states of Eastern Europe, much less putting missile bases on their soil, is folly.  To include a state like Georgia is folly on stilts.  Russia has no intention of trying to re-absorb these states by force.  She might try to annex the Russian sector of the Ukraine.  So what?  If the US wants to underline that the integrity of the Baltics, etc., should be respected, station many non-military personnel and token military personnel on their territory.  America is effectively starting a new Cold War with Russia by provocative behavior and by absurd rhetoric over Georgia, who seems determined to rule over minorities who are “part” of Georgia only because Stalin put them there.

The liberal failure of will

The list could be extended, for example, the mistake of treating China as an expansionist power and making India a nuclear counterweigh.  But the crux is this: no liberal (including Obama) should be taken seriously unless he or she offers an alternative worldview.  America is relatively safe.  Steps effective against her one real enemy (mainly infiltration) are cheap.  The withdrawal of many, many US bases abroad, no new missile defense system, no more silly wars, no more pumping military aid into the Middle East would save hundreds of billions.  A real peace dividend would emerge so that America could actually do something about its lamentable education and health systems, reorganize industry so that its environmental imprint is bearable, and so forth.

But all the right has to do is shout “national security” or “terror” or “Israel” and the liberals cave in.  The mere fact that every liberal is not out in the streets about Georgia and about the new cold war America is initiating, the fact they have complied with the Bush rhetoric and the invasion of Iraq, the fact that they do not even dare to discuss the shape of the US-Israeli alliance seals their fate.

Sooner or later liberals must question the worldview that establishes bases and sends armies all over the world.  Until then, concern about whether American troops abroad have Burger King will take priority over whether Americans at home have a decent life. Thirty years from now they will find that their aspirations are still limited to damage control of right-wing ”steps” to foster “national security.”