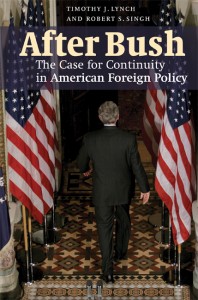 If you consider where we were only seven years ago, the notion that the world and President Bush’s record would be the victim not to terrorism but to bad mortgages would have seemed incredible. And yet, the political terrain today is not made by the war on terror as much as it is by a war for banks. Iraq, it now turns out, was less expensive than the proposed bailout of American capitalism. America has not been crunched by WMD wielding terrorists – the great fear in the immediate aftermath of 9/11 – but by credit.

Both candidates are playing a necessarily cagey game on economics – the platform on which neither expected the 2008 race to be decided. National security differences have, if anything, lessened between Obama and McCain. The winner is going have to make Pakistan central to his version of the war on terror. It was actually Obama who spoke first to the Pakistan problem. Again, his threatened belligerence toward this nation belying assertions that he intends to render US foreign policy more humble and, in the eyes of Islamists, more likeable. He intends no such thing, if his emerging rhetoric is any guide.

Rather, a President Obama would continue the central precepts of the Bush strategy. He will necessarily change the style and tone of how the United States is perceived abroad. What he will not do, unless he really is the leftist ideologue painted by Jerome Corsi, is disavow America’s right to make violence on foreigners in defense of its national security. This seems the essence of his terror war. To paraphrase: ‘I will fight more appropriate battles where the real bad guys are. I do not believe the bad guys are a figment of neoconservative imagination. They are real and organized where we, currently, are not. Pakistan watch out.’

Foreign policy has slipped down the table of campaign issues. The economic situation, for some fairly obvious reasons accounts for this. But there is another which supporters of both candidates admit but can’t say: each man is constructing plans for a third Bush term in US national security policy, only this time, they intend, it will be a competent one. Neither thinks the war on terror is not worth the fighting. Both will try and fight it better even if they call it something else.

I write this at Washington University in St Louis, the venue for the vice presidential debate on October 2. Whilst Joe Biden will attempt to highlight Sarah Palin’s lack of foreign travel – great statesman that he is – he is unlikely to argue that her party has made America less safe over the past seven years. The Bush administration has dealt with WMD rather more effectively, and in a fashion almost certain to be continued by his successor, than it has AIG and the current crisis of capitalism.

About the Author: Robert S. Singh

After Obama is Robert Singh's tenth book, his second on Obama's foreign policy, and follows books on the Bush Doctrine, Governing America, The Congressional Black Caucus and The Farrakhan Phenomenon. His previous co-authored book for Cambridge, After Bush, won the 2009 Richard E. Neustadt Prize of the American Politics Group of the UK for the best ...

About the Author: Timothy J. Lynch

Timothy Lynch is the co-author of After Bush: The Case for Continuity in American Foreign Policy (2008) and author of Turf War: The Clinton Administration and Northern Ireland (Ashgate Pub Ltd 2004). Lynch is Senior...