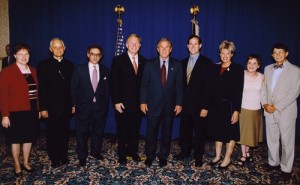 In an August 21 article in The New Republic [The Best Laid Traps], Damon Linker calls the Born Alive Infant Protection Act a “trap” deliberately set for Barack Obama by “theocon” (and Cambridge author) Hadley Arkes. The thrust of the article is that the BAIPA is 20 years in the making, “planting a premise” in the law that would eventually lead away from Roe, because it can be used to support the personhood of the newborn child.

Arkes, on the other hand, is a bit puzzled by Linker’s “gratuitous slant.”

Was the Act a trap for Obama? In Arkes’ words:

We were seeking, in part, also to begin a conversation with people on the other side. And if we didn’t persuade them, as we moved step by step, well … then we didn’t persuade them; but with each step we could save at least a handful of lives from the 1.3 million taken each year in abortion,and we didn’t count that as a trivial gain.

As one commenter on TNR points out, if a trap was indeed set, Linker himself falls into it, claiming that

“Obama is now paying the political price for handling the issue much less deftly.”

Read the full response after the jump.

Dr. Arkes, a philosopher at Amherst sent me a few comments about the article as he prepares a rebuttal; stay tuned for an update today.

Update: Here is some of Dr. Arkes’ rebuttal to Damon Linker’s piece:

With a malice quite unnecessary at every turn, Damon Linker managed to give me a back-handed compliment, by recognizing my role in making the argument that became the Born-Alive Infants’ Protection Act. (“The Best Laid Traps,” New Republic Online, August 21, 2008) This was the “most modest first step of all” on abortion, the proposal simply to preserve the life of a child who survived an abortion–after a federal judge held that we couldn’t do that. Linker’s history and rationale for the bill are garbled, but he does get this part right: that this bill was meant to “plant premises” in the law. It would not affect any abortion performed on the child in the womb–the bill after all was concentrated on the child born alive, outside the womb, surviving the abortion.

The reaction to Linker’s piece even among the readers of the New Republic confirms what was so startling in Linker’s glib assumption that there was something “ignominious” or underhanded about compelling the Democrats to face that question. The readers asked, what was so wrong about doing that–and making it clear that the child who survived the abortion did come under the protection of the law? The response of the readers points out what was so gratuitously nasty– and false– in the spin Linker put on the presentation of the bill. The bill was meant to invite people on the other side to enter a conversation with us, for many people who consider themselves pro-choice think that some abortions may rightly be restricted, and they would readily agree to protect the child who survived. We made clear our own conviction that, if people accepted our premise about the child, we could unravel their whole position. But we sought to move step by step. If we didn’t persuade them, well… each year we might be able to rescue a handful of human of lives. And from our perspective, there was nothing trivial about that.

Linker did manage to convey to his readers just how grave this issue is for Barack Obama, and there he did tell an important truth. But the curious part is just why, at every step, he imparts to his story the most malicious reading he could offer of the people he worked within the circle of First Things…. Poor Damon: he can place his pieces only when he can claim to draw on what he learned, even partially, in the circles of the friends he left and then defamed. And he can do something fresh only when he can deliver pieces with a harshness fresh and unmeasured. As for me, the main merchandise I would have to sell is the one that would explain where Linker’s account was so garbled: Natural Rights the Right to Choose (Cambridge University Press.)

Well, there you have it.

About the Author: Hadley Arkes

Hadley Arkes is the author of Constitutional Illusions and Anchoring Truths: The Touchstone of the Natural Law (2010) and View the Author profile >