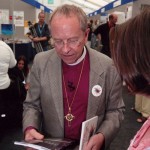 Yes, I have a background in religious studies, so this excites me more than many international crises, but still.

Cambridge had their booth going strong near the Lambeth conference, and someone snapped this photo of Gene Robinson checking out our Journal of Anglican Studies.

He had paparazzi following him around, which is a shame. From what I’ve read about him in a recent biography, he’s pretty mellow and just wants to do his work without all the hubbub. One could almost liken him to Barack Obama, except that Obama needs the attention to win an election. Robinson has already been elected by the Diocese of New Hampshire — he could probably get along without it.