Yesterday’s Wall Street Journal ran an expose on the hoops companies jump through to fund executive pensions. They do it quietly, tweak the pensions of lower-level employees (sometimes in dollars per month) and end up with a big tax shelter for thousands of dollars. 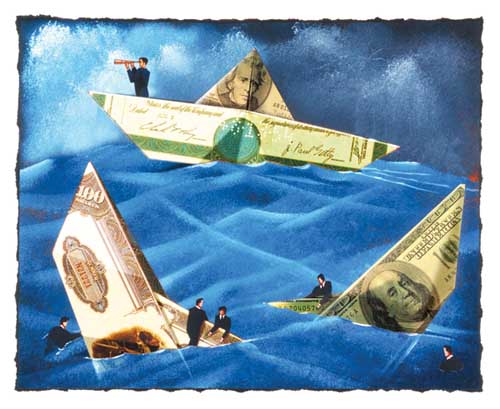 The CEO Always Goes Down with the Benjamins

At a time when scores of companies are freezing pensions for their workers, some are quietly converting their pension plans into resources to finance their executives’ retirement benefits and pay.

In recent years, companies from Intel Corp. to CenturyTel Inc. collectively have moved hundreds of millions of dollars of obligations for executive benefits into rank-and-file pension plans. This lets companies capture tax breaks intended for pensions of regular workers and use them to pay for executives’ supplemental benefits and compensation.

The practice has drawn scant notice. A close examination by The Wall Street Journal shows how it works and reveals that the maneuver, besides being a dubious use of tax law, risks harming regular workers. It can drain assets from pension plans and make them more likely to fail. Now, with the current bear market in stocks weakening many pension plans, this practice could put more in jeopardy. Onward to WSJ >>

Top executives at Freddy Mac and Fannie Mae ignored warnings that they exposed themselves to too much risk, according to this Times article. They bought bad loans, and the CEO made a cool $38 million for those last five years.

Now they’re tanking, and you and I have the dubious honor of bailing them out.

What the heck, man?

Then along come Kay and Van Puten from Watson Wyatt with The Myths and Realities of Executive Pay. They make the argument that executive pay is absolutely justified. Are the sensational news stories the exceptional cases?