Obama, the Optimist on Trade

Today’s Financial Times offers commentary by Susan Aaronson, a scholar who analyzes the murky relationships between trade and human rights. In it she poses the question: if both candidates are pro-trade, what else will they do with their policies? 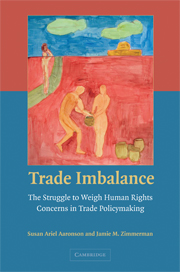 Around the world, the press has portrayed the 2008 US presidential election as a choice between freer trader John McCain and “protectionist” Barack Obama. That traditional paradigm has helped the media simplify the differences between the two men. However, such these labels do not accurately describe either candidate. And it does not fully portray the candidate, Mr Obama, who has the more optimistic vision of trade.

The conventional wisdom labels Mr McCain as a freer trader because he supports three bilateral trade agreements negotiated by the Bush administration. Mr Obama, in contrast, has come out forcefully against these agreements. Moreover, because Mr Obama states that he wants to review the effects of existing trade agreements, the press has found him to be unenthusiastic about trade liberalisation. (It is important to note that the US is already conducting a similar review of the World Trade Organisation.) Finally, Mr Obama has support from many US unions, which traditionally have taken a protectionist stance.

Mr McCain sees trade as a means to the end of economic growth and trade agreements as simply economic instruments. He has said very little about how he would use trade agreements to address negative side effects of globalisation, such as pollution. Nor has he articulated how the US can ensure that the economic growth stimulated by trade is equitable. Beyond suggesting tax breaks for business, he has not explained how the US can ensure that companies remain in the US and continue to hire US workers, rather than rely on technologies to remain productive. To bolster his freer trade bona fides, he has stated: “Only risks to the security of our vital interests or egregious offences to our most cherished political values should disqualify a nation from entering into a free trade agreement with us.” But Mr McCain’s support for freer trade has limits – especially when important constituents are adamant about trade bans. As an example, he supports continued trade sanctions against Cuba and Iran and enhanced targeted
sanctions against human rights abusing nations Zimbabwe and Burma.

Mr Obama, in contrast, is a trade enthusiast as well as a trade agreements reformer. He sees trade as a means to the end of enhancing human welfare. Thus, he has stated: “From financiers to factory workers, we all have a stake in each other’s success.” He recognises that Americans cannot succeed unless globalisation promotes greater access to resources and opportunities for more of the world’s people (our future growth markets). Mr Obama also believes that trade agreements are essential tools of global governance. He recognises that public concerns about trade are really concerns about inadequate governance – instances where our trade partners are unwilling or unable to adopt and enforce rules to protect workers, consumers and the environment. Demanding such standards in bilateral agreements will not alter global market conditions or empower all workers. Nonetheless, trade agreements can, if properly written, improve both the supply and demand for good governance at the national and international level.

Mr Obama also has put forth a consistently positive vision of the potential of trade to promote human rights. Many human rights activists think trade with human rights abusing regimes is a form of complicity that can indirectly perpetuate wrongdoing in countries such as Sudan. But Mr Obama has openly questioned this view, asking whether the US has more or less leverage with less commerce. He has argued that cutting off trade may not be the best (or only) strategy to bring democracy to Cuba or Iran.

Like Mr McCain, Mr Obama’s vision of trade has some inconsistencies. He has yet to reconcile his internationalist and co-operative worldview with his promises to Democratic special interests. In addition, he has relied on jargon such as fair trade, without defining such terms in a global context.

About the Author: Susan Aaronson

Susan Aaronson is co-author of Trade Imbalance: The Struggle to Weigh Human Rights in Trade Policymaking (2007). Aaronson is Research Associate Professor at the George Washington University Graduate School of Business and th...