Charles Bamforth in the LA Times

Charles Perry of the Los Angeles Times, talks with Charles Bamforth, author of Grape Vs. Grain, about the role of a beer connoisseur at a university known for its winemaking. Now that’s the kind of stuff this beer-loving, NorCal-born blogger is happy to see:

Dave Getzschman photographs students in the midst of making beer. 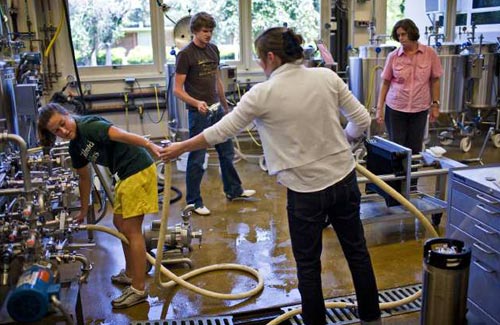 DAVIS, CALIF. — Meet the Anheuser-Busch Professor of Malting and Brewing Sciences at UC Davis.The what? There’s a professor of beer in that teeming nest of winemakers? Indeed there is. He’s Charles Bamforth, chairman of the department of food science and technology, a sturdy, jovial middle-aged Englishman with traces of a Liverpool/Manchester accent. On June 13 and 15, UC Davis will bestow diplomas on eight of his students — along with their 37 classmates majoring in viticulture and oenology.Bamforth clearly enjoys his role as the merry beer drinker at the wine tasting. “There are two kinds of students I set off,” he confides, as he heads off to teach his Malting and Brewing 102A class. “The chemical engineers, because I tell them they have no soul. And the oenologists, of course.”

Well, he doesn’t exactly set them off by accident — he teases them without end. To illustrate an issue in quality control, he pointedly tells an oenology major, “Now, let us say you’re throwing darts at a dartboard and you’re singularly incapable of hitting a bull’s-eye,” drawing out the word “singularly” to imply astonishing klutziness. (One of his recurrent themes is that beer requires more skill to make than wine does.) Everybody laughs, including the blushing oenologist.

At the end of the class, the last one of the quarter, another wine-making major presents Bamforth with a bottle of Champagne and a bottle of fine Belgian ale and slyly points out that the Champagne bottle is bigger. “Size matters, Charlie,” he says, showing that oenologists can tease back.

Bamforth, a onetime quality assurance officer at a Liverpool brewery, has a remarkable rapport with American college students. He is a prolific writer, author of such scholarly articles as “Food, Fermentation and Micro-organisms” and “The Foaming of Mixtures of Albumin and Hordein Protein Hydrolysates in Model Systems.”

His latest nonacademic book, “Grape vs. Grain,” is a concise discussion of the beers and wines of the world — including their history, technology and aesthetics — that treats beer throughout as wine’s equal in flavor and healthfulness. “I wanted to call it ‘Beer and Wine,’ ” he insists, “but Cambridge University Press preferred the note of confrontation.” In fact, he says, he likes both beverages, but he demands that beer get due respect, aesthetically and as a healthful drink.

Yes, healthfulness. When drunk in moderation, beer provides much the same health benefit as wine and is an excellent source of B vitamins and antioxidants, he tells his class. Did you know, for instance, that it’s an outstanding way to get your silicon, a trace nutrient important for bone and cartilage health, and that there are people in the U.K. who derive their entire recommended daily dose of silicon from beer? Or that the body absorbs the antioxidant ferulic acid — that’s (E)-3-(4-hydroxy-3-methoxy-phenyl)prop- 2-enoic acid to you and me — better from beer than it does from tomatoes?

Bamforth’s involvement in the beer world began when, as a postdoctoral biochemist, he was hired for his knowledge of enzymology by the Brewing Research Foundation, an institution funded by the British beer industry. A couple of years later, Bass Brewing Co. recruited him to be its research manager. Eventually, Bass sent him to its Liverpool brewery and charged him with making sure no flawed beer got into the market.

“They wanted me to have field experience,” he says. “They considered Liverpool a particularly tough brewery to work at.” No problem. Bamforth had street cred — he’s also been a sportswriter, specializing in soccer.

ALTHOUGH brewing has been part of the UC Davis curriculum since the ’40s, by 1999, the previous professor of brewing had been retired for several years and the program was in danger of fading away. So that year the university hired Bamforth to revive the program because he had the perfect résumé: big-league science and hands-on experience. And Anheuser-Busch (which has a brewery in Fairfield, just 30 miles from Davis) endowed the professorship to make sure the university got him. “I’ve found that there’s a thick seam of Davis grads at Anheuser,” Bamforth says.

When Bamforth came to Davis, the fundamentals of brewing were still being taught on a rudimentary setup installed in the ’50s. “It doesn’t look like much,” says grad student Jonathan Goldberg, gazing at a contraption about the size of a refrigerator, consisting of two worn copper tanks connected to a jungle gym of pipes, “but a lot of people in the industry have learned on this system.”

Two years ago, the brewing giant again showed its support for Davis’ program by giving the university shiny new equipment for teaching the subject, featuring all the computerized equipment you’d find in an up-to-date commercial brewery scaled down to make just a gallon-and-a-half at a time.

In the meantime, now retired Michael Lewis, UC Davis’ previous professor of brewing, had started a Masters Brewing Program at UC Extension in a classroom upstairs from a Davis brew pub.

There’s no denying that beer is still a minor player on the Davis campus. In comparison, the viticulture and oenology department currently has 103 undergrads and 20 grad students, about six times as many as Bamforth oversees.

But it’s a highly regarded program — the Dutch brewer Heineken sends employees from the Netherlands to study at Davis — making the school a beer education powerhouse. (The main places to study brewing elsewhere are trade schools.) And the future looks bright. The food science and technology department has just moved into the glamorous new Robert Mondavi Institute for Wine and Food Science. Bamforth will have a new venue for teasing students and raising issues.

Grad student Goldberg says, “Charlie’s always asking questions like, ‘How would somebody invent beer today? Probably distill pure alcohol,’ he says, ‘and dilute it with water and add flavorings. But would this be beer?’ ”

No, it would be the work of those chemical engineers Bamforth loves to tease. The ones with no soul.