Who dies on their birthday?

It is one of those perfect Spring days. Remember it well, for soon everyone will complain (loudly) about the heat. It is more than this, however. Find a breezy cafe table and give a happy-hour toast to the 444th birthday of William Shakespeare.

Don’t be surprised when someone tries to quash your enthusiasm. The debate goes on about whether April 23 was indeed the day Shakespeare was born, or just the day his birth was assigned, discussed in Peter Ackroyd’s Shakespeare: The Biography. The question is, does it matter? It’s unfortunately typical of the elusive, unresolvable—and often tedious and irrelevant—conflicts of Shakespearean biography. Just for today, take in a play, or read some poetry, and forgo, for a moment, the dust-up between Germaine Greer and Stephen Greenblatt over the provocative but unanswerable question: Did Shakespeare love his wife?

For decades, people have been studying and probing into Shakespeare’s personal life and times; David Crystal, author of Think on My Words, has a different take: the essence of Shakespeare’s work lies right there in the language itself; specifically in the way he “manipulated” language. Crystal suggests that a linguistic component should never be examined without asking “what does it do”. Does it help us understand the meaning of “what is said”? And how does it help us appreciate the dramatic or poetic effect of “what is said”?

So today, let’s take a cue from Crystal and let Shakespeare’s language do the talking. Oh, and yes, he died today too. 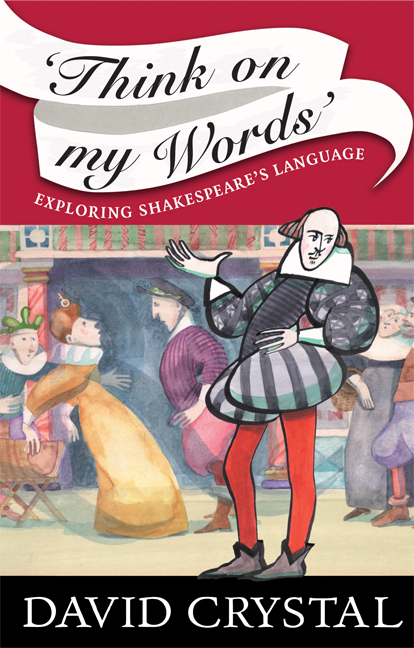 Shakespeare married Ann Hathaway when he was 18-she was 26. Six months later Elizabeth, their first daughter, was born. A shotgun wedding indeed.

Shakespeare invented the words “assassination,” “bump,” and “puke.” (The last, interestingly, is also a nickname for a native of Missouri according to the OED). Sorry.

Almost all of Uranus’ satellites are named after Shakespearean characters.

The Bard crudely discusses genitalia size in The Taming of the Shrew (Act IV, Scene I, Lines 26-28). Again, it’s his birthday, so you’ll have to look it up. Did your high school English teacher bring this line up?