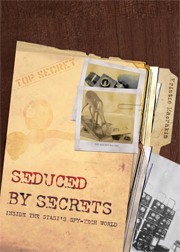 Kristie Macrakis, author of Seduced by Secrets brings us some of the gadgets of the Stasi’s hidden spy-world, one photo at a time.

There are a lot of cool images surrounding the hidden world of espionage, many of them surprising. Hidden in plain sight, in a mind-boggling array of forms, spy gadgets have a clever way of concealing secrets. I think these images of objects of espionage are fascinating visual representations of the shadowy world of spying.

Each Monday, I’ll be opening my own photo-album of spy gadgets to show you the real Stasi espionage. I’ve been in and out of East Germany before and after the fall of the Berlin Wall, and have recently done a lot of research on the organization.

This is a backroom at the German Federal Criminal Police, which houses spy evidence for court cases. It could be your garage, but alongside the seemingly innocuous tennis rackets are rows and rows of leather briefcase containers to hide documents and false documents like forged passports.

Of course, every spy needs to have a camera handy:

This carved deer statute has a Minox camera – the workhorse of the Cold War – hidden in the bottom. It is my favorite concealment. The spy inserts a pin in a hole in the bottom to activate the release mechanism.

Kristie Macrakis is author of Seduced by Secrets: Inside the Stasi’s Spy-Tech World, new April 17 from Cambridge.