Good morning, everyone. Feeling tired? On your third cup of coffee? I am. What better pick-me-up than one of the Stasi’s most ludicrous investigative methods, and one of their more amusing gadgets? Yes, it’s time to join Kristie Macrakis for another Spy-Tech Monday. 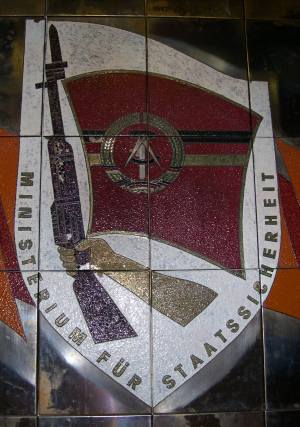 This week: Taboo — Hide the Children!

…and you wondered why the book is called Seduced by Secrets. They say that necessity is the mother of invention. This bra hides an F 21 Soviet observation camera. Spies could wear this under a light summer dress without it being noticed.

These yellow dust cloths stuffed in jam jars became synonymous with Stasi perversity. They had shelves and shelves of these things, and collected them by discreetly dusting personal objects of suspects. It seems downright disturbing that they’d keep such things, but it had a weird purpose. Called “Smell Science,” the items were said to contain the unique body odor of the person in question, and were used to track people with dogs. Fortunately for the rest of us, they didn’t work too well.