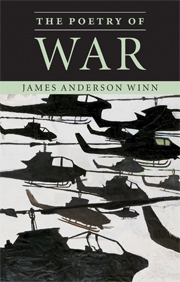 The Poetry of War is on its way to booksellers. James Winn launched the book at an event on March 4  at Boston University. Be on the lookout!

From the time of Homer and before, poets have embraced war as a grand and challenging subject. Despite the radical differences between warfare and poetry, author of John Dryden and His World and Pulitzer Prize nominee James Anderson Winn seeks to piece together the many threads that tie them in The Poetry of War.

According to Winn: “We need poems to counter the mindless simplifications of war propaganda.” Poetry boils war down to its most basic human experiences, without the lens of country, enemy or cause. The Poetry of War captures the tension created between the super-human efforts of soldiers and the awful, nearly absurd spectacle of warfare.