Fellow publicist Laura Evans reflects on the situation in Zimbabwe. Her recent trek to the peak of Mt. Kilimanjaro took her first to Victoria Falls, Zimbabwe. 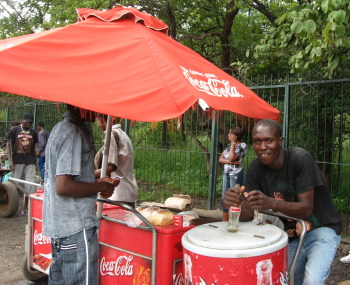 A few weeks ago I crossed over into Zimbabwe from Zambia at Victoria Falls, a lovely location where the Zambezi River

suddenly falls over an abrupt 100 meter drop (that’s 360 feet to us Americans). Approximately 80% of the Zimbabweans living in the town of Victoria Falls rely on tourism for their livelihoods. With the Zim economy continuing to deteriorate and inflation at over 1000%, Victoria Falls is almost a ghost town with many people electing to stay and visit the falls from the more stable Zambian side.

In fact, I was the only mzungu (foreigner) in town!

The major factor that has given rise to Zimbabwe’s economic instability is President Mugabe, who has been in power for my entire lifetime (now you can guess how old I am). With elections set to take place on Sunday, March 29th and opposition to Mugabe growing, things might be looking up for Zimbabwe.

When Things Fell Apart, is a great study of Africa’s failed states. Author Robert Bates, who has been all over Africa and studies its politics, notes that soon after independence, opposition parties in African states are banned by the ruling parties and policies are put into place that harm farmers.

This is exactly what happened in Zimbabwe.

After a severe slowdown of the economy in the late 1990s, farms were taken from white Zimbabweans and given to the locals. Rather than helping prop up this new infrastructure, the government concentrates on securing their own power by squashing opposition and freedom of the press.

With their economy in “meltdown”, will Zimbabwe vote for the opposition? What little news trickles out of Zimbabwe into our media shows a large number people have high hopes for change; but doubt the elections will be free or fair.

[Update]: The election was indeed neither free nor fair. We can only hope that other African states will pressure Mugabe, though this is unlikely.